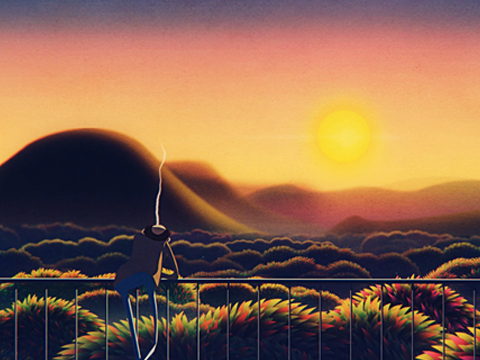 The Evening Cigarette, is a tribute made ​​by an entertainment writer, Matthieu Van Eeckhout, a former heavy smoker, to his good old friend, the evening cigarette.

The series is online since the 7th of January, with a new video each wednesday until the end of February, on the YouTube channel  THE EVENING CIGARETTE, on Studio 4 and France 4 + and other worldwide broadcasters.

An animated series in 10 very graphic tables, 10 small everyday moments completely innocuous veering to the absurd. An absurdity that can somewhat tend to dark, but always in a funny way that is full of surprises and unexpected moments.

« A close-up of a smoker and a sunset. The same gesture being repeated over and over again: then the smoker carelessly throws the end of his smoldering cigarette. The consequences are obviously fatal. Just like an anti-tobacco commercial is always followed by a short message –falsely- preventive. We want to place ourselves beyond the redundant health warning « Smoking Kills » (No way! really?!). The main idea is to add an offbeat note to the darkness of the gag. If the frame is the same, the consequences of the unfortunate act of smoking are each time totally different, unexpected and increasingly absurd” says the author.